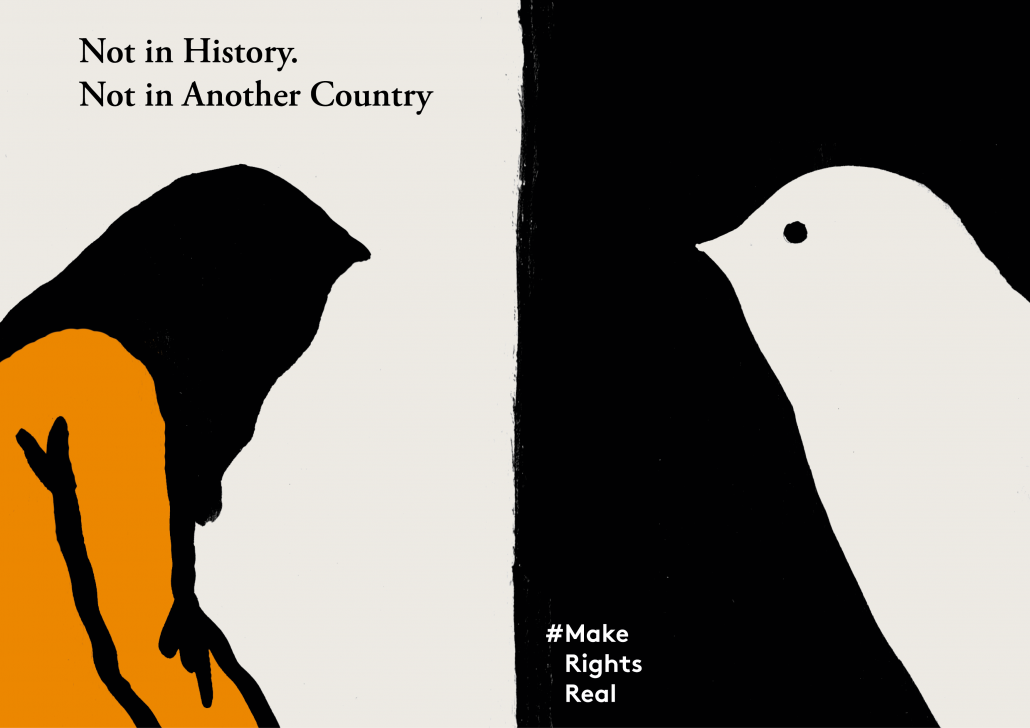 Not in History. Not in Another Country

1971. I’m kneeling on the floor in our living room reading witness statements. I’m 10 years old. My father is a solicitor. He’s been working at the table and the floor is covered in files, witness statements, dozens upon dozens of them. These are the accounts of what happened to internees detained in 1971. The type is smudged. There is a smell of copy ink rising from the creased pages.

The accounts are unmediated. Men stripped and made to run over broken glass through a cordon of truncheons and dogs. Men hooded and thrown from hovering helicopters having been told they were thousands of feet in the air. Drugged with amphetamines. Hooded, brutalised into stress positions, subjected to white noise, deprived of food and sleep.

What I remember is the clamour of terrified voices from those pages. These barracks are the anterooms of death and everyone involved knows it.

The last five abuses became known as the five techniques. The victims became known as the hooded men. The abuses became the subject of a European Court of Human Rights judgement in 1977 where they were found not to be torture but to be inhuman and degrading treatment. Article 5 of the UN Convention was carried into the European Convention and the wording is the same.

There is very little that is right about this judgement. It divided the prohibition against torture into two. There was now to be torture and the lesser standard of inhuman and degrading treatment. If that were not bad enough, the bar for torture is set impossibly high; only the vilest of practices can be called torture. The rest is inhuman or degrading and you wonder how inhuman became a lesser yardstick than torture.

Worse, the judgment sets a median line against which torturers can measure themselves. How far they can go, how pain can be refined, how inhuman they can be before they cross the line into what may be termed torture. This distinction seems to matter to torturers. The notorious torture memorandums presented to President George Bush cite the judgement in support of the interrogation methods to be used in Iraq and other locations.

The judgement means that the provision of the Convention intended to prevent the infliction of torment on the human body has in fact become an enabler of that torment.

Someone kept this alive. Someone taught it. You wonder in what classroom, in what tutorial of the damned?

In relation to the five techniques, the eliciting of intelligence seems less important than the breaking. The purpose seems to be to separate the victim from their sense of self, to break them apart in a way that can not be put back together again. It is about power and analogous to sexual abuse. By extension, it is about the politics of occupation. You take control of the body. You take control of the soul. This is torture. And the argument that torture may be needed to prevent atrocity is not a matter for serious debate. Torture is atrocity.

28th February 1972. I was in school. It was breaktime and I saw my father talking to the principal. Myself and my brother were taken out and my father drove us to Armagh County Court forty miles away. He told us it was an important case. I remember the policeman who stood beside the two schoolboys in an empty public gallery in such a way that his revolver was almost touching my face. I remember the butt of the gun, the scratched gunmetal paint, the reminder of what all this was about. I remember lawyers down below us moving papers, speaking to the judge, inaudible to the gallery. Then the judge made the two soldiers in front of him get to their feet. He spoke clearly. I remember that he said they had lied in their statements.

The judgement was Moore vs Shillington. The judge was Rory Conaghan. The case is cited fourteen times in the European judgement. The decision is technical: it established that ill-treatment must be a practice rather than a one-off, and set the parameters of that practice. It established that emergency law was not immune to fair procedure.

The judges in the European Court cite Moore admiringly and seem to want to enlist its integrity to their cause. They were in need of it. The effect of their judgement was to neuter Article 5.

Although in their haste they left a door open. Their reasoning for separating torture from inhuman and degrading treatment occupies one sentence. There is little authority, no reasoning, no precedent. A first year law student wouldn’t get away with it. The case of the Hooded Men is currently being revisited, but the court’s ghastly authority still resonates.

I’ve never left the 10-year-old boy behind. The knowledge that men will do these things to other human beings and expect to get away with it. Not in history or in another country but in your own time and space.

In September 1974, Judge Rory Conaghan was shot dead by the Provisional IRA. After his death his daughter said, ‘I have lost my father but he has left me his ideals, which I will carry with me through life.’

UNDHR Article 5: No one shall be subjected to torture or to cruel, inhuman or degrading treatment or punishment.

Eoin McNamee‘s latest novel is Blue Is the Night, the third book in the Blue trilogy. He is currently writer in residence in Maynooth University.  Further information: www.faber.co.uk/author/eoin-mcnamee.