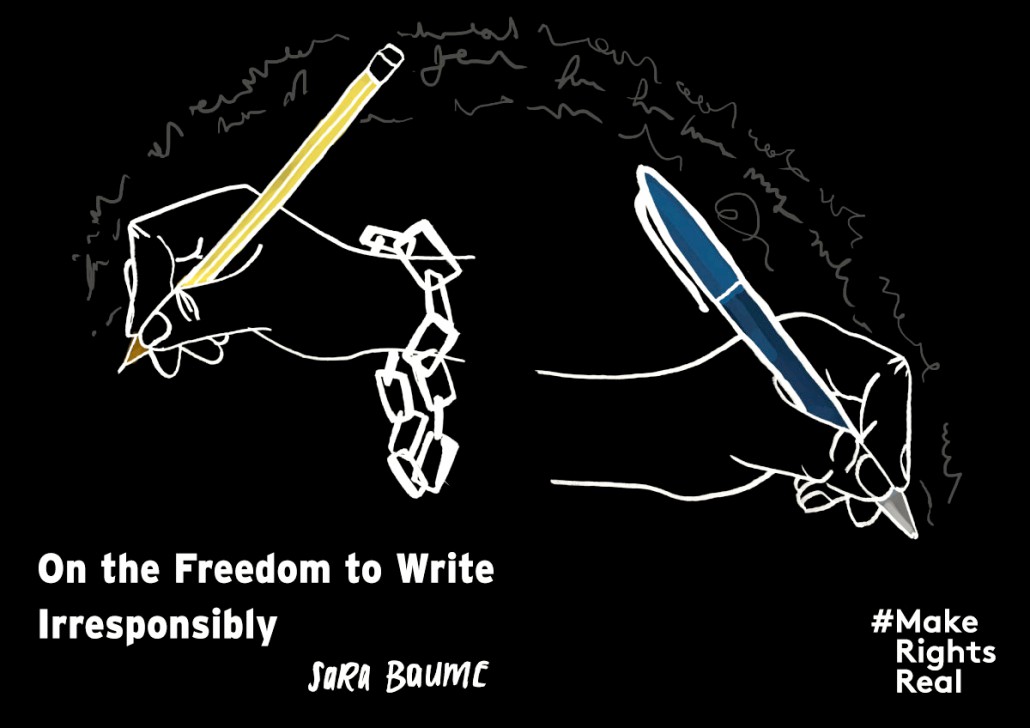 On the Freedom to Write Irresponsibly

It was a Monday afternoon. A little over a month ago. I was sitting in a lecture theatre in a small university city in the American mid-west, surrounded by undergraduates. Outside, an unseasonably blue sky. The intensely red leaves of a maple tree. But the blinds were drawn against the view. Standing at the focal point of the sloping room was a Muslim woman. A portable microphone clipped to the scarf covering her hair. The lights dimmed, and projected onto a large, white board: an image of the twin towers. One of those iconic photographs taken in the final moments before they toppled. The first plane having struck, the second just about to. A story told and retold exhaustively, but rarely from this point of view. The Muslim woman was pointing at the white board through the dark and telling her audience: ‘This is a very good thing for women in my country.’

It’s a scene I couldn’t have imagined two months earlier, when I was still at home in rural Ireland and didn’t know a single person from the Middle East. But in those two months, in that small city, my circle expanded to include citizens of countries such as Cuba, Mongolia, Togo, Uzbekistan, Saudi Arabia. From August to November, I was on residency with the International Writer’s Program run by the University of Iowa. My daily companions were thirty-three writers representing thirty-three nations. Every week, readings, presentations and panel discussions took place. Every Monday afternoon, we facilitated an undergraduate class entitled International Literature Today. One by one, we took turns to stand up and speak. About our home country and its culture. About how our poetics are irresistibly shaped by the politics of the places we come from.

That particular Monday afternoon, it was the turn of Homeira Qaderi, a fiction writer from Afghanistan, the author of six books, as well as a teacher, activist for women’s rights and senior government advisor. What preceded her reference to September 11th was an account of life under the Taliban. How the libraries were forced to close; how women were forbidden from attending school or working. Seven years of frustration, fear and boredom confined beneath her father’s roof. What proceeded was a description of how life improved, especially for women, after the US-led invasion of Afghanistan in 2001 and the subsequent fall of the Taliban.

A month on, I still wonder what the American undergraduates made of that particular ILT class. From my first encounter with Homeira, I was struck by her vibrant personality and strength of character. She laughed often, but there was always a seam of desolation underlying her brightness. Her home country is still war-torn. She talked about the death threats she receives, about suicide bombs detonated in the rush-hour traffic. She talked about the women she has known, her good friends, who burned themselves to death to escape unendurable circumstances.

Over and over again, in the sessions which took place every week as part of the program, my fellow writers were compelled to tell stories of upheaval, corruption, atrocity. The white boards of our lecture theatres showed the mutilated victims of the Sri Lankan Civil War one afternoon, mass demonstrations on the streets of Istanbul the next. I remember a session in which Yael Neeman, a fiction writer from Israel, described how, for her ‘… the conflict is the elephant that’s always in the room, whatever room I’m in, and I have to find my place beside him.’ In another, Harris Khalique, a poet and non-fiction writer from Pakistan, admitted that ‘…far from being the harbinger of hope and cherisher of beauty that I would have liked myself to be, in recent years I have become a spectator of violence and a chronicler of pain.’

During these sessions, I often felt significantly ashamed of my own body of writing. My subject matter which seemed so featherweight and futile in comparison to that of my companions. In the past, I had chimed in with the abstract expressionist painter, Agnes Martin. ‘It is not in the role of an artist to worry about life…’ she said, ‘…to feel responsible for creating a better world.’ But what, in the past, I had failed to appreciate, is that many writers don’t feel they have the luxury of choosing what to worry about. ‘…The minds of socially responsible writers in Afghanistan can never stay calm and serene…’ Homeira said, ‘…not even when they have completed their work.’ In Iowa, I realised how fortunate I am to have been born a citizen of Western Europe. How straightforward it has been for me to pursue a writing career. And how, as a writer, I am privileged to be able to experiment with style as opposed to being bound by an obligation to speak up for human rights.

The sunny season I spent in the American mid-west forced me to consider other people’s harsh realities, as well as the lenience of my own. An awareness of human rights and equality issues in Ireland should equally mean an appreciation of how lucky we are to be Irish, so that we will never take it for granted.

We should be free to write about whatever drives us; and we should be insistently conscious, as we write, that there are others who must write differently, who are not so free.

UNDHR Article 27: (1) Everyone has the right freely to participate in the cultural life of the community, to enjoy the arts and to share in scientific advancement and its benefits.

(2) Everyone has the right to the protection of the moral and material interests resulting from any scientific, literary or artistic production of which he is the author.

Sara Baume studied fine art at IADT Dun Laoghaire before completing the MPhil in creative writing at Trinity College Dublin. Her short fiction and essays have been widely published. She won the 2014 Davy Byrne’s Short Story Award, the 2015 Hennessy New Irish Writing Award and the 2015 Rooney Prize for Literature. Her debut novel, ‘Spill Simmer Falter Wither’, was first published by Tramp Press. It was longlisted for the Warwick Prize for Writing and the Guardian First Book Award, and is shortlisted for the Costa First Novel Award. In autumn 2015, she was a participant in the International Writing Program run by the University of Iowa.