My name is Ella* and – as a teenager – I was trafficked from my home in central Africa to Spain.

I was exploited for many years there and later trafficked to Ireland and exploited all over the island, constantly being moved around various brothels.

Following a raid on a brothel, I was arrested and charged under the Sexual Offences Act. I was also charged with immigration offences. The man who purchased me that day was not charged.

Soon afterwards, I appeared in court and was found guilty. What upset me was the fact that I was named in local papers as though I was the criminal. This was done despite the fact that I had disclosed my story already.

I was assisted by an organisation that works with women involved in prostitution and victims of trafficking. They offered me counselling, as well as English classes, and I was very grateful.

It meant a lot to be told that I had rights: that there were other people like me and that I could be protected and assisted. I wish I had been identified earlier and given information on my rights straight after I was arrested. I now understand such information is also a right as expressed in the Council of Europe Convention against Trafficking in Human Beings. Early legal intervention would have ensured that I was not punished by the courts.

Having been under the rule of a trafficker so long, I feel empowered to know I have rights. It has helped me start to feel strong again.

I cooperated fully with An Garda Síochána, even though I was petrified my trafficker would find me. He was eventually prosecuted and imprisoned in the UK.

A Victim and Not a Criminal

I went back to court later and was acquitted of the offences. However, so far, this has not been corrected on my criminal record.

This record states that I was arrested for solicitation and that I committed an immigration offence, as I could not produce an ID when I was arrested. These things make me seem like a criminal. In fact, I was in a situation of forced prostitution and my trafficker was the criminal who had used false documents to bring me to Spain and later to Ireland.

I went to the Immigrant Council of Ireland to seek assistance in applying for a more permanent form of residency. After five years of residence in Ireland, I applied for citizenship. I am still waiting for a decision. I am worried that my application will be refused because of the criminal record, which continues to haunt me. I want to work as a care professional with the elderly or with children, but I worry vetting will reveal my record. I feel I can never escape my past – despite the fact that I was a victim and not a criminal.

I dream of becoming a citizen of Ireland. I believe the wrongs will soon be righted and that I can finally leave my past behind me.

*Name has been changed to protect the identity of the woman featured in this piece.

Tweets by @MakeRightsReal
Where are Ireland’s best places to work for LGBT equality and inclusion? 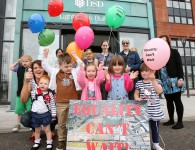 Guest Blog: Human Rights Should Not Merely Be Admired, They Need To Be Used
Scroll to top