Last week, we partnered with The Irish Times on the ‘Writing Rights’ project to mark Human Rights Day 2015.  Seven highly acclaimed Irish authors participated in this project, creating written responses – ranging from poetry to creative fiction to factual pieces – to various Articles of the Universal Declaration of Human Rights.

This week, we’re running a spotlight series, where we take a closer look at each of the participating authors.  Today, it’s the turn of Sara Baume, whose contribution to ‘Writing Rights’ was a factual piece called ‘On the Freedom to Write Irresponsibly’.

Sara drew inspiration from Article 27 (1) of the Universal Declaration of Human Rights, which states: ‘Everyone has the right freely to participate in the cultural life of the community, to enjoy the arts and to share in scientific advancement and its benefits’.

In her piece, she reflects on her participation  in the International Writing Programme, run by the University of Iowa.  Her fellow participants included women from Afghanistan, Israel, Sri Lanka and Togo, amongst other countries.  She realised, during the programme, that many of these women used their writing to highlight human rights abuses and injustices in their home countries.

“I realised how fortunate I am to have been born a citizen of Western Europe. How straightforward it has been for me to pursue a writing career. And how, as a writer, I am privileged to be able to experiment with style as opposed to being bound by an obligation to speak up for human rights,” she writes.

“An awareness of human rights and equality issues in Ireland should equally mean an appreciation of how lucky we are to be Irish, so that we will never take it for granted.  We should be free to write about whatever drives us; and we should be insistently conscious, as we write, that there are others who must write differently, who are not so free.”

Sara studied fine art at IADT Dun Laoghaire before completing the MPhil in creative writing at Trinity College Dublin. Her short fiction and essays have been widely published. She won the 2014 Davy Byrne’s Short Story Award, the 2015 Hennessy New Irish Writing Award and the 2015 Rooney Prize for Literature.

Her debut novel, ‘Spill Simmer Falter Wither’, was first published by Tramp Press. It was longlisted for the Warwick Prize for Writing and the Guardian First Book Award, and shortlisted for the Costa First Novel Award.

Sara’s short stories have been published in ‘The Moth’, ‘The Stinging Fly’ and the Irish Independent as part of the Hennessy New Irish Writing series.

She was born in Lancashire and grew up in Cork.  You can find out more about her work here. 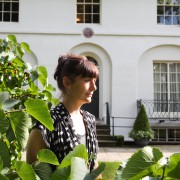