My name is Micheline Sheehy Skeffington. I was a lecturer in plant ecology at NUI Galway from 1980 until I took early retirement in September 2014.

In November 2014, I won a case at the Equality Tribunal that I took in 2009, following my lack of promotion to Senior Lectureship in the 2008/2009 round of promotions.

This was the fourth time I had applied for promotion and the second time I was deemed eligible, but I was not ranked high enough to get one of the limited places. By then I was 19 years as a college lecturer and had many achievements, so I knew I deserved better. I asked how many women had been promoted in that round and was told that, of the 17 people promoted, there was but one woman.

I was shocked by this and knew it was not just because all the female candidates were too junior or inexperienced, since I myself had been applying for promotion over nearly 10 years.

As a SIPTU member, I asked for support and my NUI Galway shop stewards were very supportive, telling me about the Equality Tribunal and its deadline of six months for lodging an appeal. This proved essential, as my two appeals within the university – on the grounds of gender discrimination and for lack of due procedure – were eventually not upheld.

During the internal university appeals, I received no documents or rationale as to how the marks used to rank me were decided. My submission that my interview board – comprising six men and one woman – was not balanced was overruled by the gender appeals board. They said that, though I ‘might have felt more comfortable’ with another woman on the board, this ‘gender balance’ was in accordance with university policy. The investigations boards insisted that all the promotions process was ‘scrupulously fair’ and stated that, since women have succeeded in being promoted through the scheme, my failure to be promoted was not on the basis of my sex.

In the summer of 2012, I was invited to appear before the Tribunal, and I realised I needed legal support. I engaged my solicitor and a barrister who informed me that, while my statistics were good, I had also to prove I was equal to, or better than, at least one of the successful candidates – and that this kind of case was very difficult to prove and had ‘never been won’.

To prove my merit relative to the successful candidates, I needed to see the applications of all 30 shortlisted candidates. I had six weeks to read the redacted copies of each application in my solicitor’s office, ­­compile a spreadsheet and make my case. I could see the sex and rank of each candidate, but not the name.

In reviewing the applications, my first question was: where was the university’s evaluation sheet? There was no such documentation, let alone justification for the marks we all received, aside from a cursory single feedback page.

The two-day Equality Tribunal hearing found in my favour, and the Tribunal’s ruling can be reviewed in full here. The 13 points made in summary state that ‘cumulatively’ I had established a prima facie case for discrimination on the grounds of gender.

The Equality Officer compared my rating in the promotion process with no less than seven men in different instances and indeed singled out three of the five other women as having been indirectly discriminated against because of their stated caring duties. The Tribunal ruling also stated that several of the successful men focused mainly on Research, yet got higher marks for Teaching, or for ‘Contribution to university and society’ than I, who had notable achievements in both those categories.

There were several other instances cited that demonstrated a highly flawed process had been applied in the 2008/2009 round of promotions, with the ‘same criteria being applied differently to different people’ according to the Equality Officer. The Officer described the process as falling ‘short of best practice’ and, indeed, of being ‘ramshackle’. Yet NUI Galway refuses to re-address the 2008/2009 round of promotions.

It is my aim to see justice done for the five other women who should have received promotions in that round. I have seen all the applications and I know they deserve it. However, because the relevant deadlines have passed, their only chance of success now is in the High Court.

A lack of transparency, as invoked by the Equality Officer, ‘can give rise to an inference of discrimination’ and until this is fully instated in the promotions process in all Irish universities, it leaves the whole system wide open to further abuse. 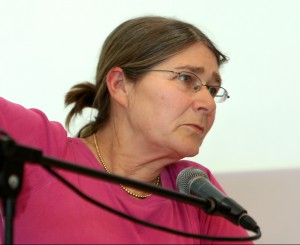 Tweets by @MakeRightsReal
The Right to Education for Persons with Disabilities: Geraldine’s Sto...