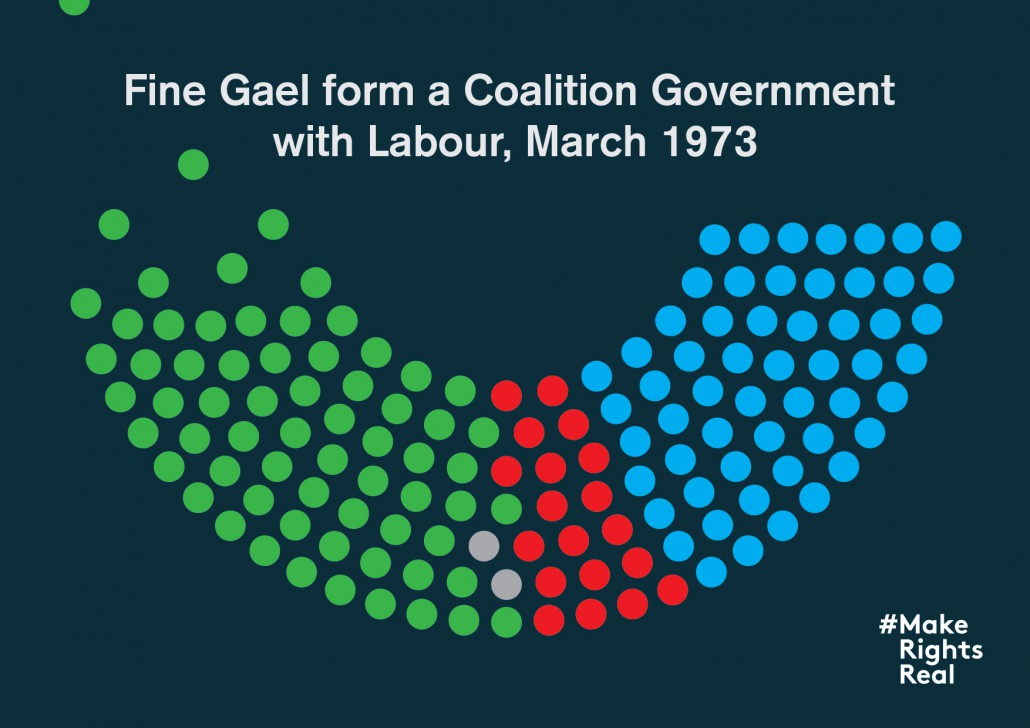 Master and the young pastel-lipped teacher.

They shared the same roof over our two-roomed

school, that was all – the dividing door a thick

50s coral gloss with its six panes of glass,

where their faces would appear if they needed

to summon one another. It wasn’t often.

And she must have winced at the howls

that came from his side.

But when they met over his coffee flask

the day after the election, somehow

they couldn’t separate. Fine Gael were in!

The party of professionals and well-heeled

farmers. Daddy’s smile drew a line back to the

20s, to the Civil War, a victory for The Big Fella,

whose 8 by 4 photo stood on the mantelpiece

medal draped on one corner. I accepted it

then that such good news would drive people

to forget themselves but now I can’t

believe the way they forgot us too –

what could the Master have been saying to her

that took so long, was he planning the budget

or choosing the cabinet of the 20th Dáil?

We weren’t called in after the eleven o’clock break

we ran wild for miles, for hours, for weeks,

mini-dress with the pink and orange circles

no protection against the waist-deep briars

in the woods behind the church where everyone

who had them was smoking Carrolls No. 1.

We ransacked rubbish for makeshift hurleys –

anything would do, the boys said but

they banned my old frying pan when they saw

I could run forever with the ball.

I was wearing that light dress so it must

have been summer before it stopped.

All the beatings, the cruelty behind those walls

continued undisturbed but someone

had to put a stop to us roaming like tinkers

when boys were seen riding the roof

it was a horse. And when Mick Looney

passed the graveyard, the crane shot

from his combine harvester showed him

a child on every stone.

[NOTE: The text highlighted above is the section of this Article that the author chose to focus on, in particular]

Martina Evans is an Irish poet, novelist and teacher. She grew up in County Cork in a country pub, shop and petrol station and is the youngest of 10 children. She is the author of 10 books of prose and poetry.  Most recently, ‘Burnfort, Las Vegas’ (Anvil Press 2014) was shortlisted for the Irish Times Poetry Now Award 2015. ‘Mountainy Men’, a new narrative poem, is the recipient of a Grants for the Arts Award in 2015. ‘Watch’, a pamphlet, will be published by Rack Press in 2016 and her ‘Selected Poems’ will be published by Carcanet in 2017. Further information: www.martinaevans.com.